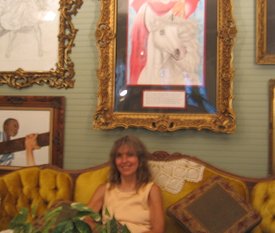 learned that Jesus is coming back to take His saved ones home to Heaven to be with Him forever! I have never lost the excitement concerning His return. The cartoons and the airbrushing that captivated me as a child have now become my gift, I believe, from God. God, the Father Who took over so tremendously after my earthly father died. Now I draw to make people smile as I did for my dad. Not for a moment, as with my dad, but forever! The encouragement that I hope my artwork instills in them, I also hope will cause them to seek Jesus, alone, as their Savior! TIME IS SHORT!!!

I remember when I was about three or four years old, curling up next to my father on the living room floor. He would be passed out because he was an alcoholic. I loved him! But, he was always so sad. My dad was born in 1906, and he was one of eleven kids. He and his brothers use to drag their drunken father home from the local bar. They were poor. His mother cared for my dad's wealthy cousin, Milton Caniff. As beautifully dressed as Milton was, it was my dad who people would stop and notice . When Milton grew up, he became a famous comic artist. He drew a series called Steve Canyon and Terry and the Pirates . Dad had a few of Milton's original drawings safely tucked away in a box carefully stored in the attic. As a child, I would sneak upstairs and spend a great deal of time looking at those drawings in awe. I also snuck peeks at his hidden Playboy magazines. I loved to look at the airbrush art work in the magazine I use to draw pictures and jump up on my dad's lap to show them to him. I wanted to make him smile. He would, for a moment. When I was fourteen,my dad died due to the alcoholism . The morning that he died, I laid in bed listening to the men trying to carry my dad's body around the corner and down the stairs. Then I heard my mother"s voice as she stood next to my bed. In one breath she said, "Your father is dead. Do you want to go to school?" My mother had had a harsh childhood and she was distant. I just rolled over. A little while later, that morning, I sat on the front porch in the warmth and beauty of that spring morning. Our mean neighbor,Mrs. Kuhn, marched up our driveway and with her arms crossed in front of her, proceeded to tell me how unfair it was of God to take my father.I stood up and confronted her, eyeball to eyeball. I told her,"God didn't do this!" At that point, God became more of a Father to me.I spent years seeking Who God is. I had been raised in a church that taught the false doctrine that salvation is obtained primarily by good works. You never knew if your works were good enough. Then I learned that I, and everyone else, is a sinner;, and that my sinfulness can't exist in the presence of such a holy God. That is why perfect, sinless Jesus took my sins into His body so that my sin's could be nailed to the cross in Him. He became my substitute and Savior. All I had to do was to accept that and ask Him to be my Savior. That I did! Then I

When I was 10 years old, I went to a Franklyn Graham crusade. I saw a chalk artist there that I thought was awesome and had never before seen anything like it. After graduating from high school; I had no clue what I wanted to do with my life. The Lord knew the plan he had for me, I just had to seek Him with all my heart. One afternoon while sitting by our wood burning stove, I cryed out to God, asking him to show me what he wanted me to do with my life. He reminded me of that chalk artist I had seen when I was 10 years old. After some research I enrolled in some chalk art courses through Eternity Arts. I received my training from Mathew Bowmen, Larry Sinclair, Ray Dombeck, and Ester Frey, the worlds oldest chalk artist at the age of 97. I am confident the Lord will use my gifts to further his kingdom.